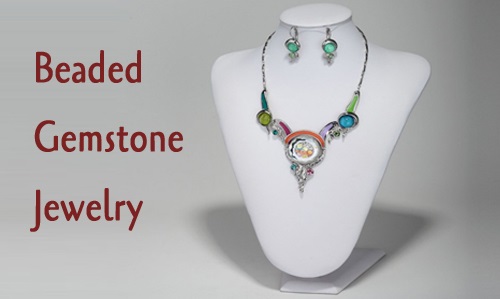 Beaded gemstone jewelry has the strongest magnetic pull which has always made is so popular amongst men and women of all age groups in the world across all times. If you’re a new entrant in the world of beaded gemstone jewelry, either as a shopper or a precious jewelry maker, then you must gear up for a thrilling and tantalizing journey ahead. The history is full of stories about kings and queens who could not hide their love for the shine of a deep green emerald, polished turquoise or red coral stone. Beaded gemstone jewelry has always been a royal choice. Before man invented the use of gold and silver in jewelry, this was the only for dressing and communicating social position and appealing to the world.

There are various alluring facts attached with beaded jewelry that you must know, as an admirer of gems and jewelry. This article brings to your some of the most interesting features of beaded stone jewelry which make it so charming and enticing.

Mesmerizing Shades to Match Your Dress and Personality

Color has always been one of the most important features of gemstones. Even though there are various other factors which determine the value of the stone but color in itself is also one of the strongest features which attract the buyer who doesn’t understand the technical values attached with the stone.

There are three essential features of colors which in synchronization are responsible for the effect they create:

The color of the gemstone has certain personality features also. Every color is known to have its individual effect. As the colors of the rainbow are determined by frequencies of light, so too do the colors of gemstones produce vibrations that have been defined by mystics and scientists alike as the personality of the stone.

For instance the red ruby or coral symbolizes courage, confidence and action while green stands for success, wealth and wisdom. In regards to color beaded gemstone jewelry has distinctive strengths over jewelry with only one or two gemstones as they carry with them a unique blend of personalities to match any occasion you think acceptable.

Gemstones always have had a strong connection with the spiritual influence they have on the mind and personality of the wearer. The religious properties of gemstones may well be spoken of from a wide array of topics and views. Astrologically, for instance an astrologist might talk of gemstones in relationship to one’s birth stone – as in the Pearl being the birth stone for June, or the Opal for October which can be thought to help with relationships and profession.

It is believed that beaded gemstone jewelry has been used to assist in the healing of both emotional imbalances and physical ailments.

Gemstone jewelry in the form of a necklace or bracelet may be worn closest to the region of the body most impacted while perfectly accenting that nightgown for a night on the town.

Over the past few years, men have started to prefer wearing smart beaded bracelets which come in wide variety in colors and styles in beaded gemstone jewelry. It is quite an interesting alternative which has been welcomes with the increasing price of quality gold and silver.

It is a strong belief that oldest use of beaded gemstone jewelry is for mystics for spiritual protection and healing. Ancient Egyptians, for example, used Amethyst for protection against witchcraft and self-deception. Likewise, Jade has been used to attract love as well as help create mindset of favorable success. Saint bracelets adorned with the pictures of Saints and other spiritual figures on beads of Hematite, known for its qualities of repelling negative energy, have also become very popular. All of this shows the increasing popularity of beaded stone jewelry and its influence on man.

Though there are many theories to follow but the best to wear a stone is to listen to your intuition and have it in your collection.